John William Crawford Jr., Capt. US Navy (ret.), known affectionately as “Captain Jack” and as Tilton’s oldest alum, passed away in February at the age of 102. Throughout his

long and distinguished life, Captain Jack remained deeply engaged and dedicated to Tilton School. He had a long history of corresponding with various members of the Tilton School community. His letters were often filled with commendations for a job well done, recommendations for consideration, and detailed accounts of the school back in the 1920s and 30s. He loved to sing the old victory songs and the school’s alma mater. A few years ago, after receiving a thank you call from a student during our donor thank-a-thon, Jack wrote to Kate Saunders, who was the Director of Admissions at the time, commending the student on representing Tilton

so well and congratulating Kate on managing the process which brought the young woman to Tilton in the first place. His letters were always signed “Forever Tilton True.”

Capt. Crawford grew up in New Hampshire and was a 1937 graduate of Tilton, where he was a member
of the varsity ski and football teams. He was the recipient of both the George C. Plimpton Award (1996) and in 2018, in honor of his 80th class reunion, was named Alumnus of the Year and served as Grand Marshal of Alumni Weekend. 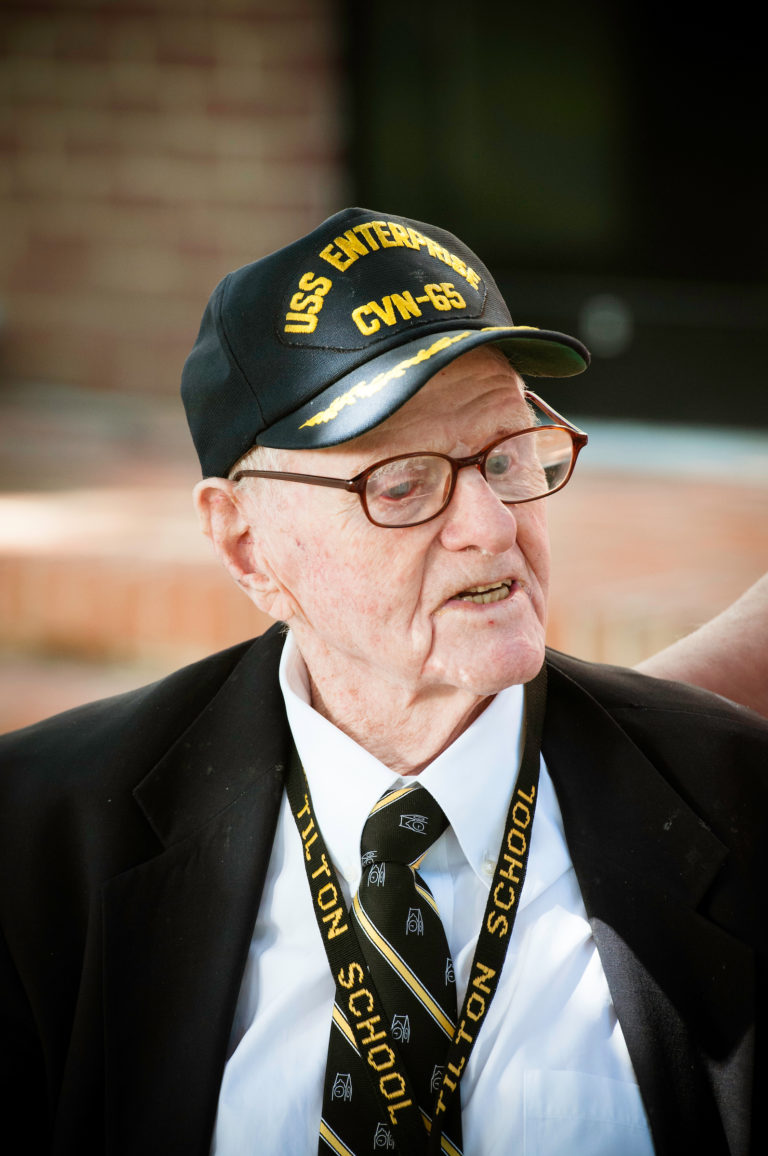 After Tilton, Capt. Crawford graduated, with distinction, as a member of the United States Naval Academy Class of 1942. He was a World War II veteran whose first wartime assignment was to the USS Yorktown, which was deployed to the Battle of Midway. After the war, he earned M.S. degrees in Physics (Nuclear Engineering) and Naval Construction and Engineering, both from the Massachusetts Institute of Technology. As a nuclear engineer and naval architect, Capt. Crawford was a pioneer of the U.S. Navy’s nuclear program. He oversaw research and development of the first nuclear submarine, the USS Nautilus, as well as nuclear plant propulsion work on the first nuclear-powered aircraft carrier, USS Enterprise, and the combat submarines USS Robert E. Lee and USS Shark. After his retirement from the Navy, Capt. Crawford served with distinction at the Atomic Energy Commission and was the Principal Deputy Assistant Secretary for Nuclear Energy at the Department of Energy. Presidents George H.W. Bush and William Clinton appointed Capt. Crawford to consecutive terms on the Defense Nuclear Facilities Safety Board. He received the United States Naval Academy Alumni Association Distinguished Graduate Award in 2001.

When he was interviewed for a Tilton publication several years ago, Jack had this to say about the origins of his Naval career: “During my senior year at Tilton, Dean Thompson called me into his office in Plimpton Hall. He told me that he had heard that I was considering applying to West Point, and, if that was the case, I had better take ancient history before I graduated. Now, I had never thought about applying to West Point, but the idea was planted and I began to think about it in earnest. I was late in the application process, but I got an interview with New Hampshire Senator Styles Bridges to ask him for an appointment to West Point. He informed me that he had already given his appointment to a student from St. Paul’s, but, in his opinion, I would receive a better engineering education from Annapolis and offered to give me an appointment there. Before I knew it, I was joining the Navy.”

Captain Jack’s son wrote to let us know of his dad’s passing. “To the day he died, some of his fondest memories were of his four years at Tilton, both as a student and as a skier and football player. Being invited to serve as the Grand Marshal of the Alumni Weekend a few years ago was a great honor for him and gave him immeasurable happiness and pride. Many thanks to Tilton and the entire community for giving Dad so much lifelong joy and fond memories. He remained a proud Tiltonian and New Hampshire man to the day he died.”

Back to The Compass
Menu