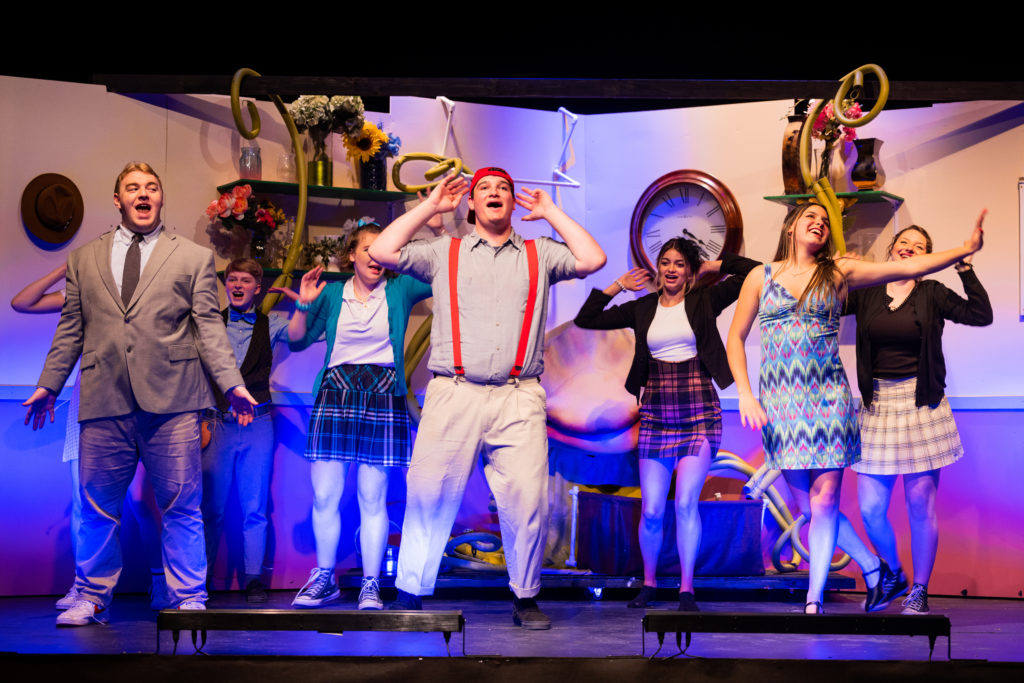 Ahead of their final show, Lamoureux sits center stage inside the Hamilton Theater, seemingly dwarfed by the formidable backdrop of Skid Row behind him. Around him, a myriad of cast members reflect on the past two months of work as they prepare to take the stage one final time. Together, first-timers sit alongside lifelong thespians, contemplating the many ways their unlikely cast gave new meaning to the acclaimed musical.

“Coming in here and being with this group of people…I wouldn’t have been able to do it without them. It was definitely a new experience, and I’m glad I had this cast to help me through it.” Lamoureaux explains.

So how do some of the most celebrated Tilton athletes find their way to becoming the leads in the spring musical? When asked how she assembled the team, all varying in theater experience, Musical Director Julie Donahue simply responded, “persistence.” After persuading her son and three-season athlete Marshall Donahue ’22, the theatrical team quickly adopted fellow athletes like Jake Grzeskowiak ’24, each one citing Donahue as their motivation to step out of their comfort zone and onto the stage.

“Jake was originally helping out in building our set when I recruited him for Seymour,” Donahue explains. “He will often jokingly ask how he went from painting our plant to being the lead.”

According to Donahue, it takes a certain type of student to step onto the stage with no prior experience. “It’s scary,” Donahue says, laughing. “It takes a lot of courage for anyone to stand in front of an audience, but when you add in the fact that many of them are new to theater productions…it’s really impressive what they’ve done.”

To those who were lucky enough to catch one of the three productions of Little Shop of Horrors, one would hardly believe that the cast was made up of numerous newcomers to the art. In a hilarious and choreography-heavy “Mushnik and Son”, Lamoureaux and Grzeskowiak had audience members on their feet before the song even concluded, laughing the whole way through.

In reflecting on his own experience taking on the male lead , Grzeskowiak mentioned how instrumental the experienced cast members were in his process of becoming Seymour. Those who came with theater experience helped to teach him blocking (the process of positioning characters in a scene), how to project his voice, and even coached him through basic choreography moves.

Of the cast members who have had more experience on the stage, many commented on the supportive and welcoming atmosphere the team had created together. “Theater feels more fun when it feels like you’re part of a family,” adds India Caldwell ’24, a Doo-Wop Ensemble Member. Marissa Dolpies ’23, who played Audrey, expanded: “I made some great friends; I don’t know that I would have had the chance to get to know these people if it wasn’t for the show.”

As we close the curtains on Little Shop of Horrors, one must pause to recognize the courage it takes to step into something uncharted. Needless to say, when Tilton students take the leap, they soar; and in this instance, directly towards “Somewhere That’s Green.”